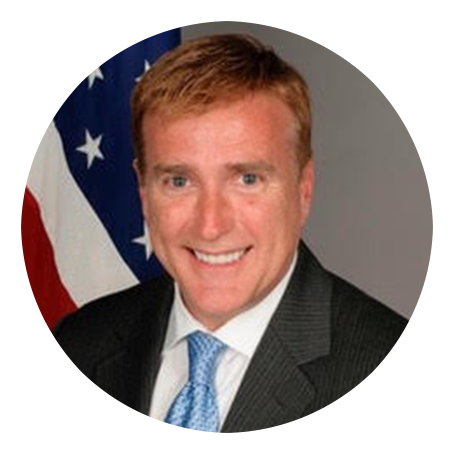 Ambassador Brewster is an internationally recognized businessman, political leader and human rights activist. He most recently served as the United States Ambassador to the Dominican Republic from November 26, 2013 to January 20, 2017, during the administration of President Barack Obama.  His appointment made history as he became the first openly gay Ambassador to serve the United States in the Western Hemisphere alongside his husband Bob J. Satawake.  Ambassador Brewster is credited with advancing the human rights of the Dominican people and migrants of Haitian descent through dedicated work with multiple governments.

His political and strategic expertise is credited for exposing corruption and advancing the rights of the marginalized and changing the landscape of equality in Latin America.  His policy expertise led to advancements in environmental laws, indictment of corrupt foreign officials, trade policy, international immigration laws and enforcement of drug policies against international drug cartels during his tenure.  He is a top negotiator for multiple agreements and treaties between the U.S. and foreign governments.

As an expert in Latin America and the Caribbean business and political communities, he has a positive and significant impact on trade between the U.S. and countries in the Western Hemisphere.  His knowledge of NAFTA, CAFTA, HELP and HOPE in addition to Foreign Corrupt Practices Act and trade policy has made the Ambassador a top resource for international companies and leaders of foreign governments.  Ambassador Brewster continues to promote democracy around the world meeting with leaders in Western Europe and Latin America while serving on the Advisory Boards of the Parliamentarians for Global Action (PGA), National Democratic Institute – Ambassador’s Circle (NDI) and The Atlantic Council – Ambassador Leadership Council.

In addition, Ambassador Brewster is a senior level strategist in organizational design, internal/external communication, e-commerce, and innovation combined with high-level international and domestic business and political experience. He served President Obama and the DNC as LGBT National Co-Chair, National Co-Chair of Obama Leadership Circles, member of the NFC and a Presidential Partner.  He is also a top Democratic fundraiser for multiple Democratic Senate and House candidates nationally.

Prior to his position as a U.S. Ambassador he was the managing partner of SB&K Global, an executive strategy firm specializing in consumer dynamics, political and human rights advocacy and reputation management, and Officer/Senior Vice President of Marketing & Communications for General Growth Properties, the country’s second largest Shopping Mall REIT with over 250 shopping malls worldwide.

Having served as a diplomat, chief executive and corporate leader, he understands how consumerism and cultural dynamics impact international business and development. Through his robust political and professional experiences, Ambassador Brewster has proven to be an innovator and leading expert in the areas of retail, international politics, trade, government relations, business strategy, diplomacy, crisis communication, global retail and product development, consumer evolution, market intelligence, positioning and branding.